Ranked Matchmaking Improvements
Increased reliability of end-game skill rank updates.
The penalty for abandoning a ranked game in progress has been temporarily reduced to 8 minutes.
Skill rank icon is now displayed on the game's main screen, next to your level.

DLC Ultra-HD Texture Pack now available for PC players.
The Ultra-HD texture pack will upgrade some of the most common textures in the game, such as characters, and weapons, to a new level of visual fidelity. This higher level of detail can be best appreciated while playing the game in 4K resolution, but it’s not limited to that.

The Rainbow Six Siege team put a lot of effort to try to deliver a solid and scalable experience to the PC community, so those of you running a 4 GB GPU will still be able to enjoy this texture pack from 1080p to 1440p resolutions.

Those of you with the high-end 6+ GB GPUs, you will be able to play the game in sharp 4K resolution, along with these Ultra-HD textures under standard lighting and shading options.
Last but not least, for those of you with the MEGA PCs with dual GPUs and with more than 6 GB of video ram, you will be able to run 4K, with the Ultra-HD textures, and with the highest settings of lighting, and shading which take advantage of tech like displacement mapping.

Note that this is a free DLC and you will have to download it from Steam and Uplay. We hope you enjoy playing the game with these new textures!

We have set some parameters that will cause an automatic kick of a griefer within a match. We are trying our best to make the distinction between accidental team killing and intentional team killing. Same goes for intentional hostage killing while playing as Defender. We will be tracking if the auto-kick feature reduces intentional team killing instances and will be adjusting the rigor of the parameters accordingly. Also, for PC, you can now use your mouse wheel in addition to the arrow keys to navigate the player selection screen.

This issue has been noticed since the Open Beta, in which we witnessed an exponential growth of griefers intentionally team killing - 1.3% of the matches were affected at the beginning, and it went as high as 7.8% at the end which is obviously unnaceptable. We were glad to observe that over launch, this issue is much less present: we did experience a small growth at first, but it has now plateaued: it started at 0.9% and stabilized at 1.8%. We still believe that this is an issue and will be tracking how the new auto-kick feature will affect these statistics.

Sharing the answer provided in the AMA earlier this month, with an update about server tick rate:

The hit registration issues are actually multiple issues that we will be working on. Some of them are being addressed in this title update, while others require development time and be addressed later (as soon as possible).

Fixed bugs on replication and kill cam:
Fixed: Pawn rotation latency: the difference between a player’s action, the server’s perception and another player seeing said action had an extra delay due to a bug. This had even more impact on shield wielding Operators since sometimes players using those would think they were protected while they were not because of the additional delay caused by the pawn rotation bug.
Fixed: Shield positioning while rappelling: certain shield angles were not being replicated properly, this caused the shield wielding player to be overprotected in certain cases. This caused hit detection issues for the player shooting at the shield wielding player.
Fixed: Shooting and moving while rappelling: when moving and shooting while in rappel, the hits were sometimes not registered properly by the server.
Improved: Kill cam replication issues: the kill cam was not displaying an accurate representation of hit positions. The point of view seen after death was not the exact point of view of the killer. Moreover, we have instances in which the kill cam shows body parts sticking through walls while they actually weren’t being seen from the killer’s perspective. This has been improved for the next title update, but we still need additional work on this. It is still considered under development.

Updated the server tick rate for PC (intermittent & temporary)
With the goal of improving positioning and shooting replication, we will be deploying a first update on PC in which the player position update rate is set to 60 times per second (vs. the previous 30). Having had conclusive tests internally, we have decided to share this update on PC first because it has a faster deployment speed compared to consoles. Note that these PC tests will be intermittent as we will be trying various configurations until we are satisfied with the outcome. When this feature has been validated with various external tests on PC, we will be deploying this update on consoles as soon as possible.

General issues we are aware of:
Although we do have a high ping kick in place, one thing to note is that there are some edge cases in which some players have high ping due to poor internet connection spikes. This affects replication quality for the other players within that person’s match.

We hope that this addresses your concerns and we will make sure to keep you updated as we keep monitoring and improving on this and progress within our plans.

Unifying the experiences between Casual and Ranked
PVP - Ranked playlist HUD has been synched up with the Casual playlist
See this forum post to find out more about the evolution of our playlists over time as well as the specifics of what the Casual and the Ranked playlists consist of. There are still a few differences that will remain (listed in this post).

It is important to note that we are beginning to work on a proper Hardcore playlist, which will be available in early 2016 and will contain a very minimal HUD and a more realistic experience. Until then, we encourage you to try out the ‘Hardcore’ HUD Preset in the Custom Games so that you can experience some of the elements that will be present (or removed) in our future Hardcore mode. Note that this is not a final iteration.

Refining the Ranked Skill Rating System
Increased reliability of end-game skill rank updates.
Skill-based matchmaking now casts a much narrower net. By default it now tries to match you with players +/- 1 rank away from you. If it can't find anything, it increases by 1 rank in each direction every 30 seconds. This will increase the average duration of ranked matchmaking, but we feel that they should stay bearable now that more players are hitting level 20 and playing ranked.

When the outcome of a matchup with a more pronounced skill level gap ends up being contrary to what the system expects (ex: Bronze team wins against Gold team), the skill rating updates will now be less aggressive. Losing/gaining more than 2 ranks at once should be much rarer now.

We believe that the reaction was too intense and caused drastic changes. We will be toning down the variations to offer our players a more stable skill rating experience, which we believe is for the best. We will be diminishing the impact of individual matches and be looking at the overall results of the player in order to set their skill rating. We will be closely monitoring the impact of that change on matchmaking quality and might consider bringing similar changes to Casual in the next patch.

Skill rank icon is now displayed on the game’s main screen, next to your level.

Spawn killing reduction
PvP - Reduced time to detect Defenders outside from 5 seconds to 2 seconds.
We believe this will reduce the amount of spawn killing, as it will make it impossible for Defenders to rush to the spawn location undetected. Moreover, our game design philosophy is to have the Attackers’ safe haven be outdoors and the Defenders’, indoors. We felt that 5 seconds gave the Defenders too much time to get in position to take down their opponents and made the Attackers too unsafe outside.

Written communications improvement
Increased the amount of characters available in the chatbox: from 32 characters to 128 characters.We believe this change will help you and your teammates communicate better.

Visual improvement
Glaz scope visibility enhanced.
We have fine-tuned the filter to reduce the glow and enhance the overall visibility and contrast. 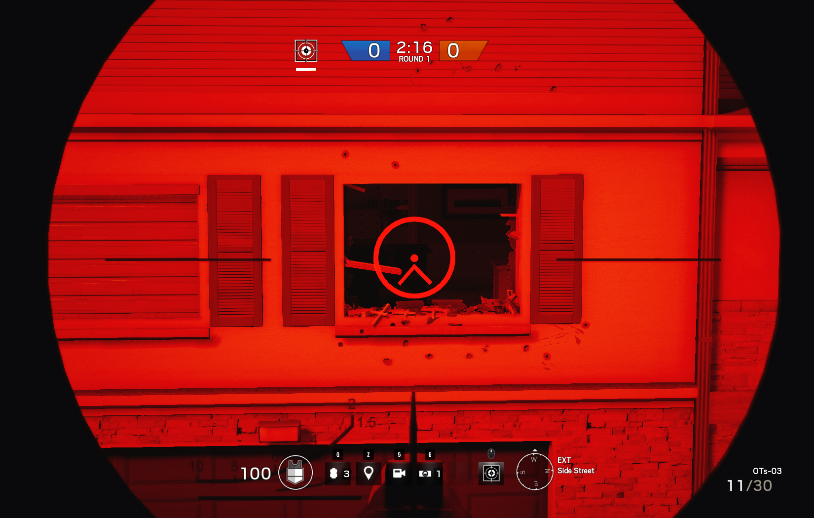 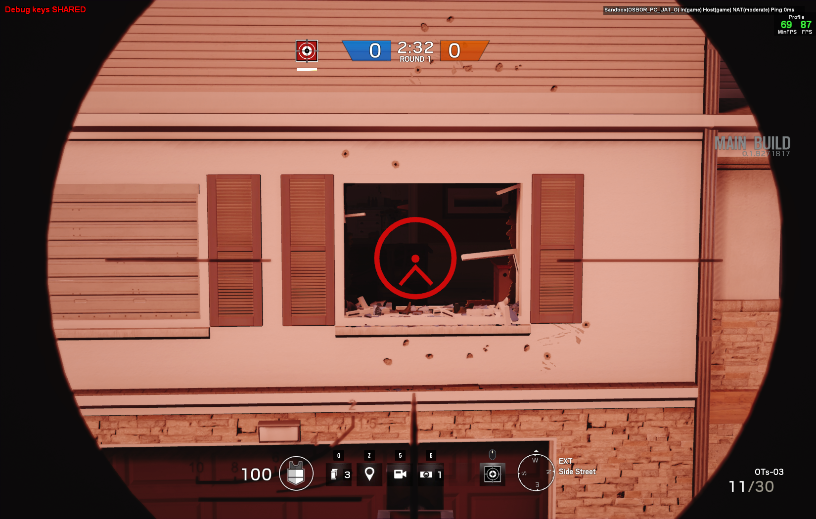 Top Community Raised Bug Fixes
Please be aware that this is not an exhaustive list and that we are only highlighting fixes that were done about the most commonly raised community bugs.

Online Flow Fixes
Fixed an issue where squads would get split up when returning to lobby or the menu.
Fixed a bug where the XP and Renown screen post-match would be empty.
Fixed a bug where you could see the enemy team’s operator choices during Selection phase.
You should now be able to see your teammates in the lobby on rematch.
Fixed a PVE renown exploit (hack).
In matchmaking, players searching for a session will now automatically reach step 2 "Joining game session".
Fixed an issue when inviting players which are currently in a lobby.
Fixed error code 0-0x00000602 (received when returning from a matchmaking game to looking for players step).
Fixed connectivity issue in which the session hanged and all players were being disconnected if a character left the session or got disconnected while escorting the hostage
Fixed a game invitation bug in which the former host received matchmaking error 2-0x00000064 if he previously quit a Terrorist Hunt lobby and selected a Squad only game afterwards.

Miscellaneous Fixes
Fixed a PC voice chat bug in which inviting players to the game set the squad leader’s voice chat record mode settings to Open.
Fixed a PC bug in which pressing ALT+ENTER in-game while having the personal information panel open would leave the player with no functionality.
Added a clear indication in-game that all Terrorist Hunt modes difficulty levels are intended for a full team of 5.
Fixed a PC bug in which the refresh rate selection was broken.
Localization fixes have been made as we updated the text in multiple languages.
Various connection, stability, performance, errors and crashes issues have been fixed.